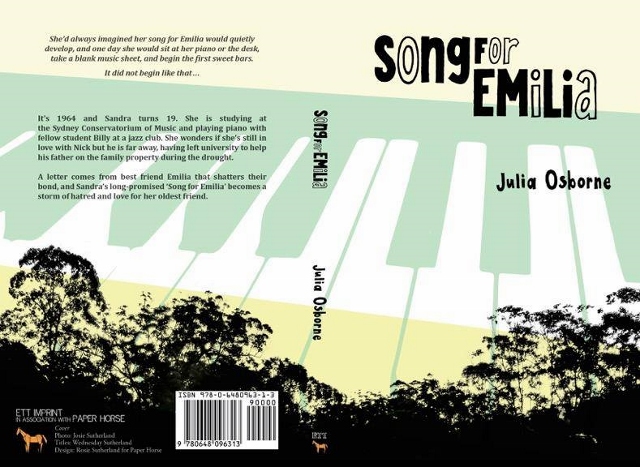 Sandra remembered it clearly – that fantastic summer day in 1962 when Nick arrived in Sydney to enrol at university. She’d watched for him from the lounge room window, just as she used to watch for him through the curtains of her upstairs bedroom in the Curradeen bank, on his regular Saturday trips to town from the family property.

At the end of the long drive to Sydney, at last he’d turned the corner into her street, swinging his dusty ute to park at the kerb in front of her house. He slammed shut the ute door, brushed a hand over his hair before clamping on his felt hat and strolling to the front door – ajar on this hot, sticky day.

As he raised a hand to knock, her heart skipping a beat, Sandra reached the door first. Almost sixteen and feeling brave, she’d said hello and kissed his cheek, delighted to have his quick kiss on her forehead in response. Old friends . . . but hadn’t Nick invited himself to visit her? It had been her mother’s idea to invite him for lunch.

She had led him through the house to the back garden where the family sat in the shade of an old tree. Nick Morgan – hers for today, and she knew that it was herself that he’d come to see. Wasn’t it?

Two years later, the first day of her Bachelor of Music degree: as Sandra crossed Macquarie Street and walked past the tall, imperious bronze rider on horseback, she could hardly believe her footsteps were taking her to this building. At the front, four crenellated towers built like a castle – the castle of her dreams – this was the Sydney Conservatorium of Music.

Where the road divided, to the left it wound beneath trees to Government House and the Botanic Gardens, and to the right . . . well, that was the Conservatorium, object of her ambition for so many years. Her fire for performance had fizzled . . . but the fire to compose burned stronger than ever.

The first time Sandra played in concert, she had been overwhelmed, but managed to complete the performance of her composition to the professor’s satisfaction. Tutors encouraged her, ‘Talent, hard work and lots of luck,’ they insisted. And passion, dedication! Sandra knew she had plenty of that. She’d learned to enjoy playing piano in ensembles – composing for the students with their violins and cellos.

By now, Nick was almost halfway through his degree in architecture at Sydney Uni. How many times have we met in those two years? Working it out, she ruefully calculated, makes a total of four or five times a year, plus an occasional lucky phone call from the university college.

Hardly a boyfriend . . . but she was sure Nick didn’t have anyone special. Even though he was five years older, if he was seeing another girl he wouldn’t spend any time at all with her. So what did five years matter?

One of those lucky telephone days, she’d hear Nick’s voice on the phone with surprised delight:

‘G’day,’ she’d reply, trying not to giggle. Holding the receiver close to her ear, she’d hear his breath in the phone as if he considered what to say. Usually a suggestion to meet somewhere: coffee at a café, a stroll through the Domain to the Art Gallery. Or after the pictures, they’d go down to Harry’s Cafe de Wheels in Woolloomooloo for a pie and mushy peas. They’d sit on the edge of the wharf, feet dangling over the water, revelling in the city lights, the slap of waves against the pilings; their freedom.

Since Sandra had first shown Nick the treasure of Rowe Street’s arty shops and galleries, the wonderful bookshop and Rowe Street Records, they’d sometimes met at the Teapot Café. But the café had closed so now they went to the Galleria Espresso, a popular coffee shop for artists, and more comfortable, they agreed, than the Teapot’s iron chairs. It was always busy, the walls crowded with paintings, many for sale – painted, they supposed, by the art students that came for coffee, or to sit reading for hours.

Who said that life was measured out in coffee spoons, she wondered, stirring another lump of sugar into her coffee.