I’m delighted to let you know about the new edition of The Midnight Pianist published by ETT Imprint in association with Paper Horse Design, to be released as a paperback, eBook and audio book to follow… 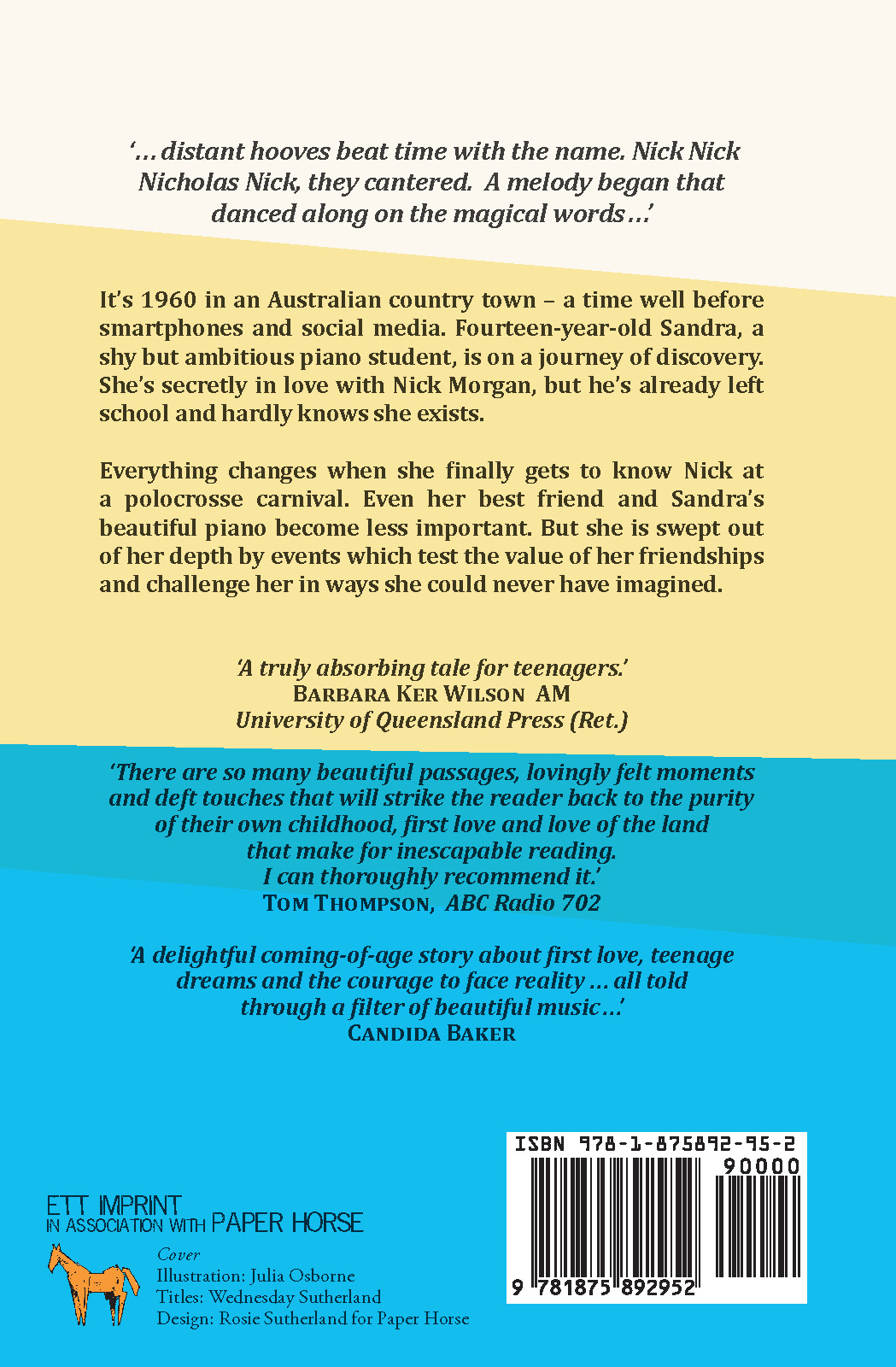 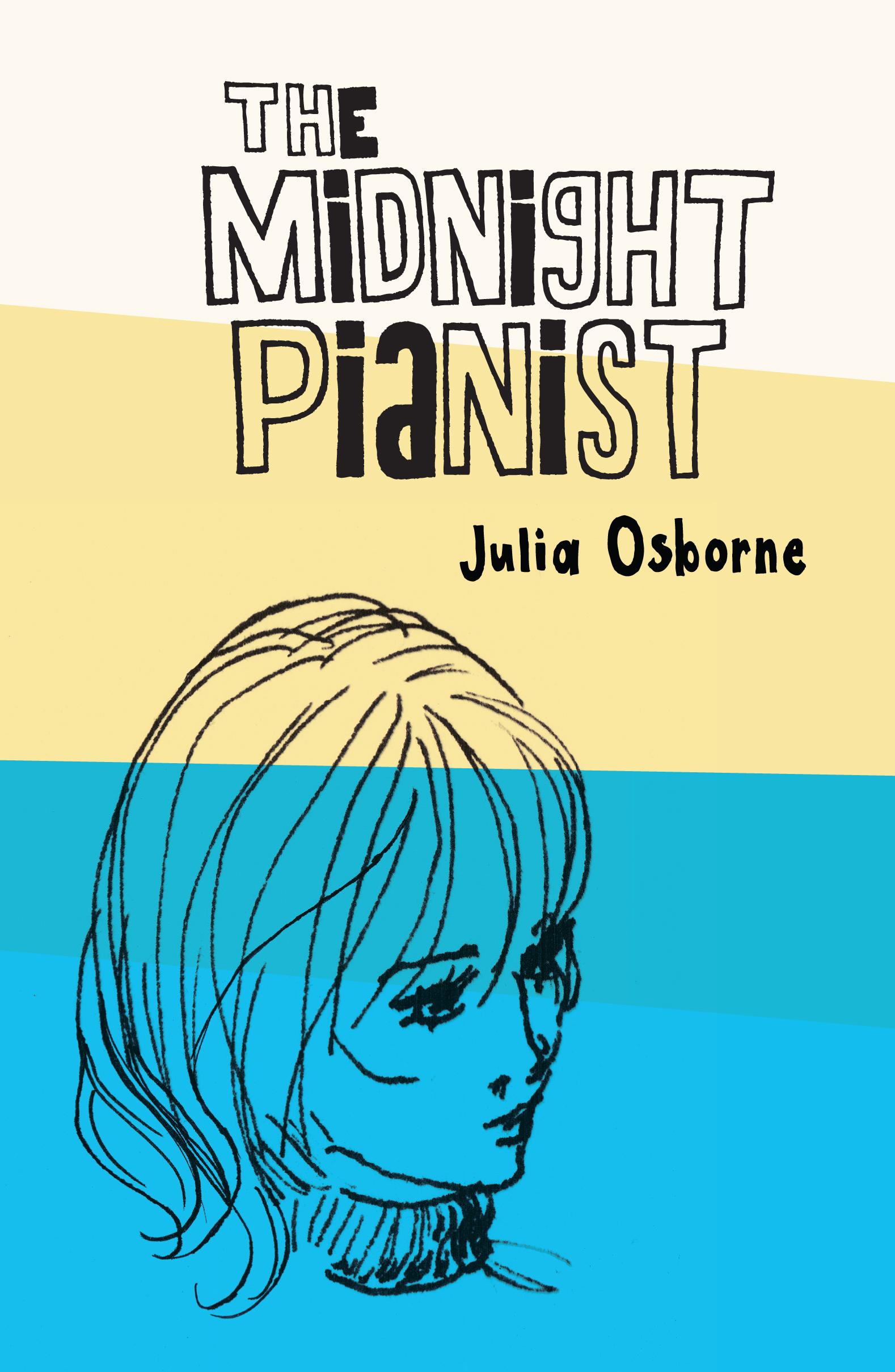 … from the introduction to the recent Schubertiade at the Sydney Conservatorium of Music by violinist Goetz Richter, on paying attention.

This is my story:

I went to the Schubertiade at the Sydney Conservatorium of Music – miracle to find this concert just when I arrived in Sydney for a brief visit … Sublime music, beginning with Sonatina in G minor.

I sat beside a man who looked familiar, so I asked him if he’d been at Sydney uni when I worked there. No, NSW, engineering. He’s also a violinist so afterwards we talked. He asked, Where do ideas come from? Did Schubert wake up one morning, and lying in bed, think: Today I’ll write a sonata?

I couldn’t answer, standing there under a clouded moon, waiting for my friends. But later I remembered what I’d once written: ideas are plucked from the ether, from a walk in the park, a remark overheard on the bus, the flight of a bird … watery deeps… certain music.

Schubert wrote Fantasie in F minor for his unrequited love, so you see… one never knows …

…on the edge of the saltbush country, in the 1960s country town of Curradeen, a passionate young pianist falls for a young man who lives with his family on a merino sheep stud. She is THE MIDNIGHT PIANIST, who longs to perform in concerts, whereas his life has been mapped out by his father to carry on with the property – even against his will. But life is strange, and sweeps people in unexpected directions in this novel to be enjoyed by young readers and baby boomers alike.

THE MIDNIGHT PIANIST will be released in a new edition as an eBook in April,  and will be followed by an audio version for radio broadcast and audio book, published and produced by ETT Imprint in association with Paper Horse Design & Publishing.

The sequel, Playing with Keys, is in final draft form.

Thank you to Alison Buckley, Macksville, who is writing a novel about a Kurdish woman fighter, and had this to say on return of her 260 page manuscript:

‘When Julia Osborne recently reviewed my manuscript, she generously took the time to discuss it beforehand and completed a light edit in a few days. She engaged empathetically with both my manuscript and my journey as writer, and also made fearlessly honest recommendations. When I picked up the hard copy, Julia went through her notes and clarified them.

‘I appreciated her respect for both my work and my efforts to traditionally publish for the first time. Julia is an experienced, published writer with a sound knowledge of English and an intuitive feel for the context, characters and writing style of a manuscript.

‘Working with her has been enlightening and encouraging, and I would recommend her editing to anyone requiring professional feedback on their writing.’

Here are a few lines from the sequel to The Midnight Pianist … called Playing with Keys, set in Sydney, 1961. I’ve written about 48,000 words. At least when I painted with watercolours, I knew when I had done enough and needed to stop … how does a writer know when to give up on sharpening the blade?

Sandra spread her Geography homework on the dining table: black Indian ink, thin-nibbed mapping pen, and coloured pencils. How ridiculous and irrelevant to be asked to draw a map of Africa’s mineral deposits. She could hear the rapid d-d-d-d-d of her mother’s treadle sewing machine in the next room. That would be the flannelette pyjamas for her and her sister. Hopefully hers wouldn’t be yellow with stupid mice like last winter.

She looked at Prue, curled in an armchair with a Three Musketeers comic.

‘Does Mum know you went to the Stadium last Saturday afternoon?’ She had wanted to ask since she’d spied Prue with a group of girls last weekend on the footpath outside the Sydney Stadium, but she wanted her parents to be out of hearing.

………… That’s all, I said it was a tiny taste. Keep in touch via Facebook [The Midnight Pianist book]

I have already told readers that I am slack at updating my website. Apologies for continuing slackness …

I am happy to report that during my most visit to Sydney in January, I am now signed with ETT Imprint for The Midnight Pianist to be both eBook and audio book, the latter with relevant piano inserts. This is very encouraging, as although I have been in the writing game for almost 30 years, and there has always been support from readers, it’s a tough field to make headway – which is why I chose to self-publish my novels.

It’s very satisfying for me to write ‘novels’ as my early fiction was all short stories – see my publication and broadcast record – and my first novel Falling Glass came via a writer’s grant from the Australia Council for the Arts. The Young Adult/Crossover novels have emerged from there as I began to delight in writing longer works.

The Midnight Pianist will be followed by Playing with Keys, in the final polishing stage. The next one is Song for Emilia … but one at a time, perhaps? More work to be done …

Meanwhile, I agreed to read a friend’s novel and did a light edit, which I enjoyed, as it’s another test of skill. I await a published novel coming from Canada for review. New fields! Who knows what’s next?

My Facebook page is [The Midnight Pianist book].  Please come and say hello.

Crikey, the 6th already … and once upon a time “summer time” meant exactly that, whereas now it means the clocks require us to get up an hour earlier than solar time. (I should’ve written “summertime” … that subtle difference?)

I’ve always thought of Time as elastic – it expands and contracts according to occupations. As a child at school, the distance between holidays was extraordinarily long.
On simple notes:  The time spent with a beloved can seem so brief, yet be the identical length of time spent at a desk on a more onerous task where the time drags.

The humidity is 92% today, a breeze stirs the curtains reminding me I still need to wash the front windows – I have an eventual limit to sea salt and spider webs … so forgive my trifling thoughts please while I’ve procrastinated.

I must say, I’ve surprised myself … but if you’re like me and always need a project – even if it’s just painting the house – you will understand. Although I received a grant in 1991 to write the novel that became Falling Glass, and it was short-listed from 400 entries in the national unpublished manuscript competition in, I think, 1994, run by Angus & Robertson (remember that name?), and late 1990s Pan MacMillan liked it if I made big changes (back when editors wrote long letters to writers), it was not published until 2002 when I did it myself. Apologies for such a long paragraph … when I wrote short stories I learned to be very brief……. but I want to illustrate my point further:

The Midnight Pianist also had its beginnings long, long ago then went to the bottom of the bottom drawer. You see, I moved house a lot, all over the place – country to coast, town to city, simultaneously changing jobs and etc. but you don’t need those details.

It was only when I quit work and moved to Nambucca on the mid-north coast (Australia) that I rewrote TMP and decided to self-publish – much easier in 2013. Strangely enough – or not – needing a project, I wrote a lot of fictional letters to amuse myself in 2014, then decided that if I created the backstory to the letters, I would have a sequel to TMP. I had fun doing this, and Playing with Keys will be published early 2015.

After a visit to Sydney mid-september, I came home and found I had nothing much to do … thoughts kept dropping into my head, unbidden, and suddenly I decided to write it as the 3rd book. From taking over 10 years to produce my first novel, I’ve managed to crash through this one in a few weeks. I can’t believe myself. The key for me is having plenty of time to think through my characters and scenes. Plenty of people had asked me ‘what happened next’ so when the 2nd and 3rd books are out there, you will all find out!

And you know what? Maybe you already know this, and I know the romance market is huge … and I didn’t set out to write a romance, but that’s what this trilogy has become – the final book set in 1964-65: Song for Emilia. Now for the polish … which might take longer than writing the book.

“And we will be like two stars circling about each other, drawn together – a double star.”

Yes, The Midnight Pianist has grown into a trilogy, the following titles to be published:

A lovely review from John Holland, a Queensland author, his latest book published as both paperback and eBook: ‘Left of the Rising Sun’. More info about JH on his Facebook page and amazon.

The Midnight Pianist is one of those “coming of age” books that will resonate with readers everywhere. More particularly it will jog the memories of those of us who grew up or spent time in Australian country towns during the period the book covers.

The book starts with scenes of quiet innocence. Fourteen year old Sandra is in love with Nick Morgan. It is a secret love she shares with no one. Not even her best friend.

The characters develop as the book progresses and we are soon caught up in the story of Sandra’s coming of age as events bring her to an early sense of maturity.

I don’t want to give too much away here. But I will say that I love the author’s gentle, smooth style and I love this book she has created. I’d recommend it to anyone who is looking for an intelligent story line penned by a skilled wordsmith.

We all lived in this town once and shared the moments and the memories. Many of us long for those days of innocence which have passed. Lost to us in the reckless helter skelter of modern life.

We can find welcome refuge within these pages