If you’ve read “Falling Glass” you will have met Qwerty the cat . . . 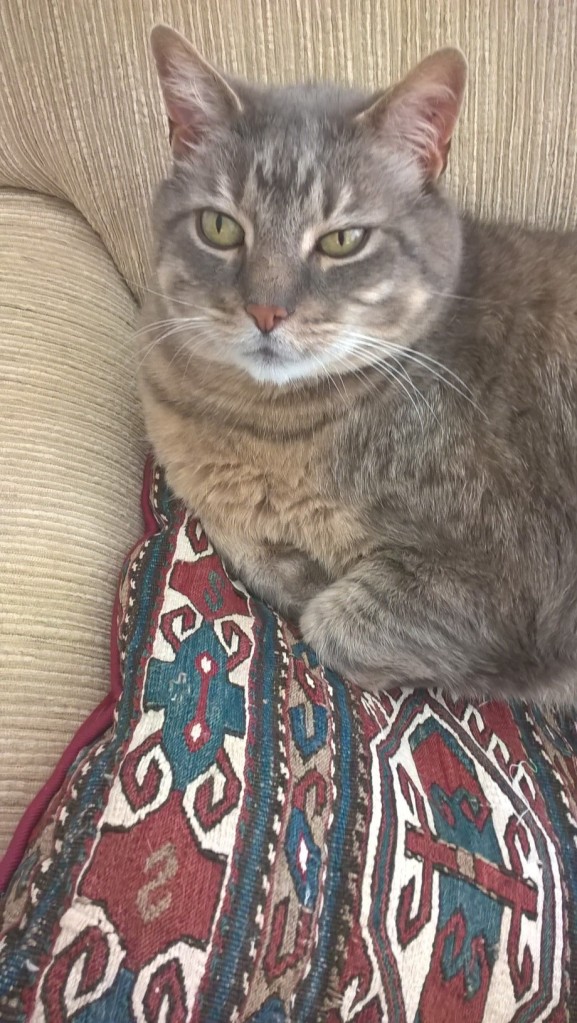 One warm winter morning a small grey tabby cat found his way into Irene’s home. The front door of her Sydney terrace was open to catch the sunshine, so of course, the little cat wandered inside. That’s what any sensible cat will do, isn’t it?

Creeping and sniffing along the hallway, keeping close to the wall – just in case – the little cat found himself in a room filled with unidentifiable, interesting smells. Golden eyes looked about, arriving at a pair of woolly slippers hooked on the rung of a stool, these slippers attached to a woman in a dressing gown, eating her breakfast at the kitchen table.

Irene quietly puts down her bowl of porridge, hardly daring to move as she and the little cat gaze at each other. ‘Puss puss?’ she whispers. ‘Puss puss?’

When the cat doesn’t answer, she asks, ‘Where’s your home, little cat? Are you lost?’

Her voice is gentle, sweet, and the little cat relaxes. He sits by the hallway door for an easy escape should it prove necessary, but his tail wraps around his front paws, and he regards Irene with a seemingly calm demeanour.

‘Oh, you’ve a brave little cat,’ Irene smiles. ‘You’re really not much more than a kitten. Perhaps you might like some breakfast?’ Taking a jug from the table, she pours milk into the saucer from her teacup, leans ever so carefully to place the saucer on the floor, then resumes her position on the stool.

The little cat is bemused. What is this on the floor that smells so enticing and encourages him to stretch forward to sniff and tentatively taste? Reassured, he laps continuously until the saucer is empty, then he sits back to wash his face with a paw, which takes all of five minutes to complete.

Satisfied with his grooming, the little cat decides he will investigate and resumes wandering about the room, poking into cupboards, to the hallway again, then into a bedroom. Irene quietly follows at a distance, intrigued by her morning visitor. She has decided the cat looks a bit scruffy and unloved, and he was certainly hungry. A stray cat, maybe a dumped kitten that once had a home but now nobody wants – searching for a new residence where a sympathetic human will provide love, food and security.

Irene has lived by herself for years, with occasional visits from her nephew, an unpredictable boy who turns her house upside-down for a couple of weeks then goes home to his family in Taree. A cat would be nice company as she sits at her typewriter hammering out stories for the local paper.

Meanwhile the little tabby has vanished around another doorway and Irene follows . . . there he is, perched on her untidy desk in the bedroom, his tail wrapped tidily around his paws. ‘And a handsome tail it is too,’ Irene agrees as he gives the tip of his tail a single twitch.

She reaches out a hand towards the small cat face, strokes his forehead so that his eyes can’t help closing in a small state of bliss at this gentle touch.

‘Would you like to stay here, little cat?’ Irene says, still whispering. ‘You can be my editor, and we’ll write wonderful and amazing stories together. You’ll grow big and strong, and never be hungry again.’

Now the little cat settles on her bed, choosing the rug still rumpled from Irene’s sleep. Beneath the grey tabby fur, she feels a purr begin, runs her hand along the cat’s spine as he curls into the rug.

‘Guess what, little cat,’ Irene announces, ‘I’m going to call you Qwerty, because you sat right next to my typewriter and that’s how the top keys go, which shows you have an artistic and writerly nature.’

Irene returns to her stool in the kitchen, to the remains of her breakfast, her tea and toast, leaving Qwerty asleep and dreaming. He will live with Irene for the next ten years when his story picks up again in January 1991.  And so it begins . . . who knows for how many more cat-years after that?